SSix decades ago, only one American in 100 had diabetes. Today, it’s almost one in 10, including rising numbers of youth and one in four people older than 65. More than 90 percent of the cases are Type 2, once known as adult-onset diabetes, which is linked to diet, obesity, inactivity, environmental toxins, heredity and other factors. It can wreak havoc throughout the body—attacking blood vessels, eyes, nerves and organs—and make COVID-19 harder to combat.

The good news is that scientists have identified lifestyle strategies that lower the risk and harm of diabetes. “Type 2 diabetes is a condition, not a disease. It exists in a particular environment; when you change the environment, you can change the condition,” says San Francisco-based Nicki Steinberger, Ph.D., author of Wave Goodbye to Type 2 Diabetes. That’s important news for the one in three Americans—about 88 million people—that have prediabetes, 84 percent of whom are not aware of the fact, according to the U.S. Centers for Disease Control and Prevention.

A key player is the pancreas, a multitasking organ of both the endocrine and digestive systems, which produces insulin to help make and store energy from sugars, as well as enzymes to break down proteins, fats and carbohydrates. While Type 1 diabetes, a genetic autoimmune disease, negates the body’s ability to produce insulin, Type 2 results from an insufficient or improper use of insulin.

Type 2 diabetes can be triggered by metabolic syndrome, a condition marked by high blood pressure, a large waist circumference and high triglycerides. Insulin resistance—the body’s improper use of insulin—can also be a sneaky forerunner to the disease, often manifesting as excessive abdominal fat, fatigue and frequent infections years before hyperglycemia—too much sugar in the blood—becomes evident.

Hidden Environmental Factors
The American Diabetes Association cites excess weight and lack of exercise as significant risk factors in the development of Type 2 diabetes, while recent studies also point to impacts from toxic air, chemicals and mercury exposure. Research published in 2018 in Environmental Science and Pollution Research International reveals a correlation between exposure to phthalates found in plastics and the incidence of new-onset Type 1 diabetes in children, suggesting that the loss of beta cells from phthalate exposure leads to a compromised insulin response.

An earlier Indiana University study published in Diabetes Care showed young-adult exposure to mercury can raise the risk of developing Type 2 diabetes later in life by 65 percent. Davis adds, “Heavy metals, such as mercury and arsenic, have been linked to impaired insulin secretion and decreased insulin sensitivity.” Choosing organic produce and fish that contain lower levels of mercury, such as salmon, shrimp and catfish, is advised.

Medication Backlash
Improving gut flora is vital in improving most health conditions, including Type 2 diabetes. “Microbes in the gut that have become toxic for a multitude of reasons create an inflammatory response. This type of assault repeated over time increases the risk of fatty liver and compromised cells—conditions linked to a decrease in insulin sensitivity,” says Steinberger.

Research published in The Journal of Clinical Endocrinology & Metabolism suggests that antibiotic use, especially narrow-spectrum ones, can contribute to diabetes. The side effects of certain medications like statins and other cholesterol-lowering drugs has been debated for decades, and 2019 research published in Diabetes Metabolism Research and Reviews concludes that statins can more than double the risk of Type 2 diabetes, especially for people taking them for two years or longer.

Sleep and Sugar
The National Sleep Foundation considers sleep deprivation a significant diabetic risk factor and recommends that people take melatonin as a sleep aid and avoid working night shifts. It cites a study in which healthy adults that were restricted to four hours of sleep for just six nights exhibited a 40 percent reduction in their ability to break down glucose.

Although the role of dietary sugar in diabetes is debated by scientists, evidence shows a strong correlation between Type 2 diabetes and sugar, fructose and high-fructose corn syrup in the diet. A 2015 review of 21 studies published in The British Medical Journal found that regular intake of sugary beverages can lead to diabetic conditions even when obesity is not a factor. Many holistic health advocates identify all sweeteners, including “healthy” alternatives like honey and maple syrup, as sugars that harbor similar potential.

This mindset is harmonious with glycemic index recommendations, so avoiding any added sweeteners and opting for fresh, low-glycemic fruits like berries, citrus and apples, as well as eschewing pasta, white rice and bread, can go a long way toward maintaining healthier blood sugar levels. Stevia, an herb, is a better sweet substitute. Preferable in drops or bulk form rather than blended with sugars, it’s been shown to help control blood sugar. 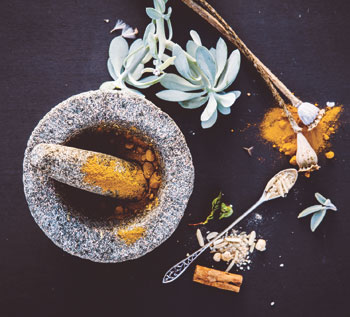 photo: hugo/AdobeStock.comPromising Phytotherapy
Insulin-supporting medicinal herbs offer many benefits for Type 2 diabetics. Aloe vera, bilberry, cinnamon, goldenseal, bitter melon, milk thistle, fenugreek, fennel and gymnema sylvestre, among others, have been found to aid in the utilization and production of insulin. Tulsi, also known as holy basil, is a heavy hitter for reducing blood glucose and buffering the kidneys and liver from the metabolic side effects of high blood sugar. Herbs that support the liver, such as milk thistle, dandelion and artichoke, are other noteworthy plant medicines, especially when blood sugar fluctuates from high to low.

Renata Atkinson, a clinical herbalist in Greenbelt, Maryland, says of blood tests, “Clinical trials have shown that many of these herbs can have a significant effect on the clinical markers for diabetes and prediabetes in fasting blood glucose, postprandial glucose and HbA1C, or glycosylated hemoglobin.” Animal and in vitro studies show that they impact blood sugar by slowing digestion and the absorption of carbohydrates, thereby improving insulin sensitivity, increasing the release of insulin and modulating the metabolism of glucose in the liver. Some of Atkinson’s favorite plant allies are hawthorn, hibiscus and tilia for their anti-inflammatory and antioxidant properties, as well as lipid, glucose and vascular support.

Atkinson also emphasizes the wisdom of keeping it simple. “I encourage clients to incorporate culinary herbs and spices into their daily diet, like cinnamon, fennel, garlic and onions. For someone taking insulin, it’s important to introduce herbs slowly and be sure to take them with meals, monitor blood glucose levels closely and keep their physician informed of herbal protocols and follow their physician’s recommendations.”

Improving diet choices can be highly rewarding and fun, too. “Not only does eating well not have to be tortuous, it can be enjoyable, inspiring and creative,” says Steinberger. “It helps to keep it simple by using fresh, whole foods with basic herbs and spices.”

Whole-Body Healing
Holistic bodywork modalities such as acupuncture also support diabetic health. In 2019, Iranian researchers reported in the journal Hospital Practices and Research that biofeedback training lowered glucose levels and improved the quality of life for diabetic patients. “The biggest mistake I see people with diabetes make is to view the mental piece as not as important as the physical,” says Bongiorno.

Linking all the vital threads in the complex web of Type 2 diabetes, she adds, “I would say to start with the basics—plant-based foods, exercise, stress management and better sleep. When you have a solid base, your body will be less susceptible to the other factors.”

Thriving is possible through commitment and wise choices. As Davis says, “There is strong and consistent evidence that many people who are motivated to reverse Type 2 diabetes can succeed in this task.”

Marlaina Donato is the author of several books and a composer. Connect at AutumnEmbersMusic.com. 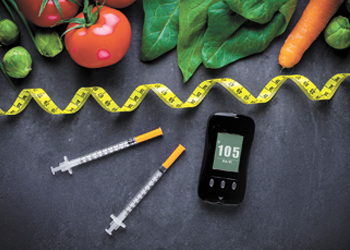 Nutrition Tips from Brenda Davis
The foundation of the diet should be whole-plant foods—organic, whenever possible—deriving the vast majority of calories from vegetables, legumes, fruits, intact whole grains, nuts and seeds, which are rich in protective components, such as fiber, phytochemicals and antioxidants.
Eliminate or minimize inflammatory items, including fatty dairy products like cheese and ice cream, ultra-processed and fried foods, refined carbohydrates like sugar and white flour, alcohol and meat—especially red and processed varieties. Avoid all sugar-containing beverages.

Holistic Reminders from Lauren Bongiorno
“All areas of our lives are linked together, and if one area is depleted, it’s going to impact your ability to thrive in the others. The 8 pillars of diabetes wellness within my practice are exercise, diet, sleep, stress, self-love, relationships, energy and diabetes management. For improved blood sugar management and sustainable habit changes, you must identify where you are least fulfilled and work to fill that gap.”

Inspiration from Nicki Steinberger
“The area where we are most vulnerable, without a doubt, is our own toxic thoughts. Because our thoughts and beliefs trigger emotions which lead us to action and non-action, mindset is the first place to investigate to understand the results of our lives.”

Read 170 times
Tagged under
back to top

We do not necessarily endorse the views expressed in the articles and advertisements contained on this website, nor are we responsible for the products and services advertised.

The information contained herein is not intended to diagnose, treat, cure or prevent any disease or medical condition. Always seek the advice of your medical professional.